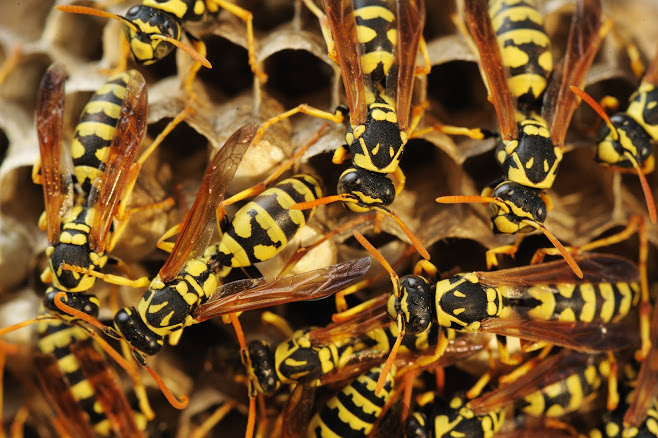 Whether you own your own home or manage a commercial property, you can benefit from an understanding of how wasps and hornets behave, how they can harm people, and what kinds of measures you can take against then. Check out these answers to some frequently asked questions about these pests.

How Do Wasps and Hornets Differ?

Wasps and hornets bear many similarities to each other, with mainly superficial differences. Wasps don’t generally extend to more than one inch in length, while hornets typically grow larger. Both creatures feature black bodies with ringed patterns, but wasps have yellow rings while hornets have white rings.

Both wasps and hornets boast some important differences to bees. In addition to growing larger than bees, these pests don’t pollinate plants in their quest for food, dining instead on insects. Unlike bees, wasps and hornets don’t die after stinging their perceived enemies.

Where and How Do Wasps and Hornets Make Their Nests?

Wasps and hornets can build nests out of various substances. Many construct globe-shaped or umbrella-shaped nests out of chewed paper or wood pulp, attaching them to recessed spaces such as tree branches, tree stump cavities, or doorways. Mud daubers get their name from their choice of mud as building material.

Not all wasp or hornet nests appear in plain sight. Some wasps build their nests in recessed spaces in the ground, often commandeering vacated rodent burrows for this purpose. These hidden nests can cause trouble for anyone who accidentally steps on them, stirring the angry stinging insects to defend themselves.

What Can a Wasp or Hornet Sting Do to You?

Wasp and hornet stings largely resemble bee stings in their effects. The venom causes pain, itching, redness, and swelling at the site of the sting. The swelling usually creates a bump up to half an inch in diameter, but in some individuals the bump may grow to more than two inches.

Allergic reactions to wasp or hornet stings can cause medical emergencies. If family members or visitors to your facility have allergies to these creatures’ venom, they may develop symptoms of anaphylaxis such as wheezing, restricted breathing, or shock. You can avoid this scenario by scheduling pest control services.

How Do Pest Control Specialists Deal With Wasps and Hornets?

In some parts of the country, the approach of cold weather kills wasp and hornet populations without any need for other pest control measures. In Southern California, however, the relatively mild climate may delay or discourage this natural transition, thus requiring more aggressive action from your pest control team.

Wasps and hornets tend to cluster in their nests once the sun goes down, making it easier to get rid of the entire nest at once. Pest control experts may use chemical sprays or dusts to kill large populations. In addition to direct nest treatment, perimeter spraying can kill the pests in areas they frequent.

Baited traps can capture wasps and hornets individually or in small groups. This method may prove especially helpful if the pest control team can’t find an underground nest or other hidden pest population.

How Can You Keep Wasps and Hornets Away From Your Property?

Since wasps and hornets eat insects, they naturally gravitate toward sources of protein. You can therefore reduce your wasp or hornet problems by getting rid of old garbage and leftover pet food. You may also need recommendations from your pest control service on how to minimize your local insect population.

Bear in mind that wasps and hornets may turn to sugary foods for energy when they can’t get sufficient protein. Get into the habit of throwing away soda cans and other leftover sweets immediately instead of leaving them out in the kitchen or yard.

Eary Termite & Pest Services can help you get that residential or commercial wasp or hornet problem under control. Contact us today to request our service anywhere in our extensive coverage area.

Sorry, the comment form is closed at this time.